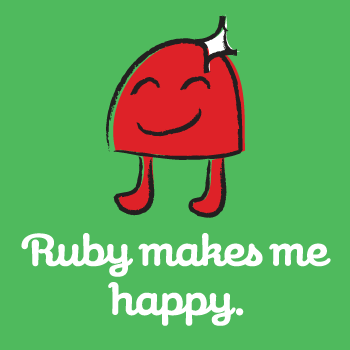 I am using the Ternary Operator quite a lot, because it keeps the code concise and often times more readable then long if-else statements. One thing that I discovered just recently is the following:

If you look closely, you will see that there is not a comparison == but an assignment = operator present. The interesting fact though is where Ruby puts parenthesis in this code:

Makes a lot of sense, but is not obvious, especially if you are debugging some library code.

Another cool thing that you can do with the operator is nesting:

But most of the times you are better of with Switch Cases.

There are some pretty cool features in the Ruby Switch Case. You can switch by class if you like:

This works, because Ruby uses the === method to compare in a when block. So the when code above evaluates to:

The cool thing is that you can implement the === method yourself and add some Ruby magic to the Switch Case.

But be aware of some stuff that might bite you while using Switch Cases! You should know that Ruby allows multiple arguments in a when block:

It’s also important to know that you need to add a newline before writing your block code. It’s also possible to write oneliners by using a semicolon or the then keyword, otherwise the following code will be interpreted as belonging to the when condition:

Older versions of Ruby also supported a syntax with a : at the end instead of a ;, wich looks kind of strange:

Since the Ruby parser allows a lot of flexibility, it’s possible to implement stuff which does not make sense at all. For example this statement which misses the if at the beginning of the condition:

Evaluating this method will fail (or even kill the ruby process):

One thing that happens to me quite often, is that there are implicit things going on if you forget to add commas in your code, while I am not sure how and why they work:

Everything is a Method

Well not everything in Ruby is implemented as a method, but there a lot of things that you can at least use like methods. Did you know for example, that you can call the accessibility modifiers in Ruby like methods? This is pretty handy if you want to mark only some methods:

It’s also quite important to know that method objects provide a lot of interesting information. Especially if you are doing some serious debugging with a lot of inheritance and Ruby magic involved:

When talking about methods, it’s worth knowing the keywords that are used in Ruby and in which context they can be used. A good example for this is the * character, which can be used quite differently:

You should also be aware that some operators behave different from others:

In analogy to Pearl, Ruby provides a bunch of Predefined Variables that are worth knowing. A lot of them contain information about the current environment, code or execution context.

There are f.e. some extra variables for matching groups in Rubys regular expressions:

Unfortunately $0 has nothing to do with match groups, but is the name of the current executed program…

When working with Ruby you get used to some best practices when it comes to names. This is important, because several thing are evaluated differently depending on up- and downcase:

So it is quite surprising that Ruby comes with an Array() method which transforms everything it gets into an array unless it’s already an array:

It’s also worth having a deep look into the Ruby documentation about Arrays and the Enumerable Module, because they provide a bunch of really cool helpers that can save you an everage developers lifetime if you know them by heart.

For some more cool Ruby tricks have a look at this Rubyinside post.